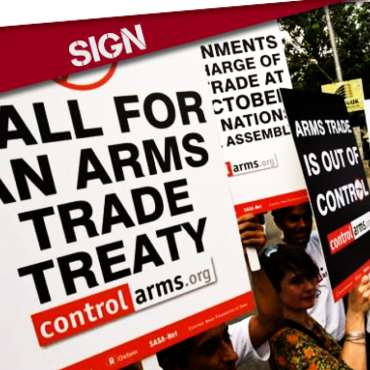 Collection of signatures against the sale of Spanish arms to Saudi Arabia.

The initiative is promoted by Save The Children Spain.

Via Website. The collection of signatures is a means of reaching massively the institutions of the Spanish State. In this case the letter is addressed to the Ministry of Foreign Affairs.

The campaign focuses on the Spanish State, to prevent the shipment of weapons to Saudi Arabia that endangers the security of countries like Yemen. The collection takes place on the Spanish website of Save The Children: https://www.savethechildren.es/actua/ninos-conflictos-armados

From this moment until the end of the campaign, when the number of signatures sought is reached.

The campaign seeks 200,000 signatures to be delivered to the Ministry.

Because never in the last 20 years have there been so many children living in war-affected areas. Every three hours, the number of children in conflict zones increases by more than 10,000. In countries like Yemen, Syria, South Sudan or Afghanistan, schools and other places that should be spaces for the protection and development of children are bombed every day.

Despite having restrictive legislation on the transfer of defense material and having signed the Arms Trade Treaty, Spain continues to sell arms to Saudi Arabia despite the risk that this country will use them to attack the civilian population.

We must demand that the Government protect children trapped in armed conflicts and immediately suspend all types of sale of Spanish weapons to countries in conflict.