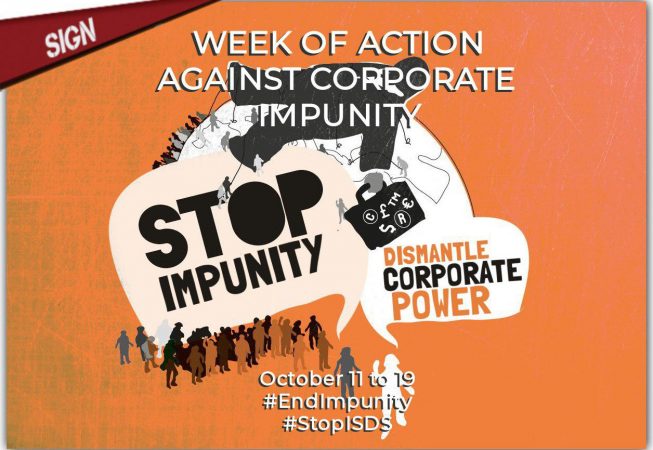 Collection of signatures to paralyze trade and investment agreements in the EU that include a global system of transnationals’ private courts (ISDS).

Through this collection of signatures, which aims to reach one million throughout the EU, it is sought to exert pressure on the political class, making clear how negative the approval of the ISDS would be for people and for the environment. However, the intention is that the draft of a United Nations Binding Treaty, which has a strong opposition from companies, gets ahead, as well as tcarrying forward different corporate responsibility laws.

The goal is to reach one million signatures. Activists and individuals can sign.

ISDS, abbreviation for “Investor-state dispute settlement” is an opaque parallel justice system to which only the richest people have access.

Transnational corporations have used this system to threaten demands from billions of euros to the governments that face up to them. The regulation of pollution levels of coal-fired power plants or the rise in the minimum wage are two examples of laws that were questioned by the ISDS.

This is an unfair and undemocratic system that puts the interests of transnationals ahead of those of the people.