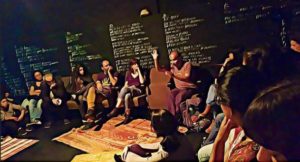 Hai Pontes (“There are Bridges”) started walking today. Four days to draw the x-ray of a hole. From today until next Saturday we will delve into the role of the performing arts to transform ‘the social’ and that of activism to transform ‘the cultural’, while seeking to weave alliances between both worlds.

Today at 5:00 p.m. Teatro Ensalle in Vigo hosted the first of four debate spaces that will be held these days. On this occasion, the meeting point focused on how the processes of active social construction are carried out and what role each and every one of us plays in society. We began by questioning the extent to which the context influences the construction of society; We continued sharing the different ways of influencing the public space; Diverse experiences on cultural and social interaction; And we “stirred” in the prejudices that all of us have when activating ourselves.

Tomorrow morning the workshops are going to Píncipe street from 11:00 a.m. Teatro Trono, Anómico Teatro, Teatro Ensalle or Avelina Pérez, will tour the streets and spaces that orbit around it through various forms of interaction. In the afternoon Laboratorio Fantoche (De Catro a Catro, 5:00 p.m.) and Teatro Trono (Teatro Ensalle, 7:00 p.m.) will bring us closer to their vision of reality. After Teatro Trono’s performance a new convergence point  will take place. It will seek to analyze the relationships established between culture and society. We encourage you to come closer to continue drawing the X-ray of the gap!!