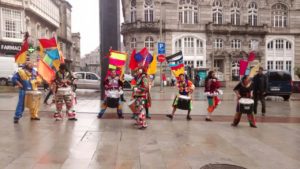 Yesterday, under the rain, Vigo drew a picture full of art and vindication. On the second day of “There are Brigdes. Four days to draw the X-ray of a gap “, different performing arts groups invaded the central Príncipe street and its surroundings. Bolivian group Teatro Trono, brought closer to us one act that are part of their Decolonizing Caravan: “El Matrimonio del Soldadito” (“The Marriage of the Little Soldier”) a critic to Gener violence that is not usually perceived by the naked eye. Avelina Peréz broke with the indifference of the private by publicly exposing her “Dejadnos Comer Tranquilos” (“Let Us Eat Quiet”), the group Ghatas Salvaxes took to the streets in order to claim the public space for women free of patriarchal violence, Vigo’s Teatro Ensalle and Anómico Teatro draw from the monotony of everyday life in the city, singing from different points to create a bewildering concert, while a performance in which an invisible suit tested the passers-by to see if they notice who that suit put to test. 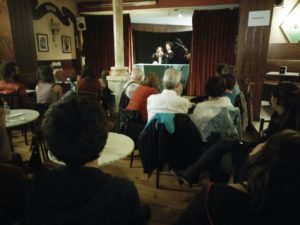 In the afternoon we met in the cafe “De Catro a Catro” where, with the help of Laboratorio Fantoche, we enjoyed a puppet theater session (with the work “Ni Pío”) and a brief monologue (“La Corona, la Espada y el Traje de Peluche” “The Crown, The Sword and The Teddy Suit”) that delves into the everyday fears we have and the “cuirasses “we built to avoid facing them.

As the last interaction of the day we approached Teatro Ensalle where Teatro Trono offered us “Arriba El Alto” (“Go, El Alto”) which, through its characters from different social classes, imbues us with the culture and daily life of the city of El Alto and the change it experienced with the passage of the years, making in turn remove the consciences of the people who attend this show. 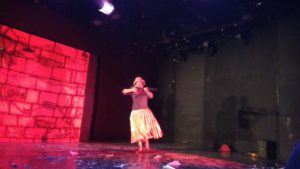 Already at the end of this second day of Hai Pontes a new point of convergence was opened where we continue to delve into the gap between the world of culture and social activism. The debate revolved around society and culture, but in this occasion we deepened in what the different ways of building mean, and the relationship among them. Within the debate we examined the various organizational and social realities, in addition to the strategies to bring culture towards society and vice versa.

Today we continue with the workshops!! We will go to the Calvario pedestrian street to develop different interactions, and then Trasluz Teatro (De Catro a Catro, 5:00 p.m.) and Teatro Trono (Teatro Ensalle, 7:00 p.m.), will be the path to follow to a new convergence point where the debate will return to go over the room.