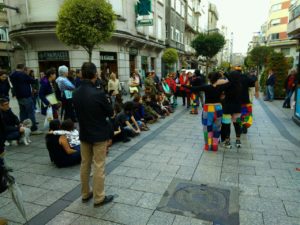 On the third day of  “There are Brigdes. Four days to draw the X-ray of a gap” we changed the stage to the pedestrian area of the historic neighborhood of Calvario to re-move the city. Teatro Trono once again represented “The Marriage of the Soldadito” to make visible a critique of gender violence. While Avelina Peréz broke with the indifference of the private, the Ghatas Salvaxes paid homage to the victims of Rana Plaza (“3564”), and Vigo’s Teatro Ensalle and Anómico Teatro broke with the monotony of the city singing from different points whilet representinf¡g a performance in which an invisible suit was put to test.

At 5:00 p.m., the café De Catro a Catro opened its doors so that we could witness the proposal of Trasluz Teatro, “Othello: The farce of fazzoletto”, a farce based on the work of Othello by Shakespeare, which took place in two sessions. Continuing with the afternoon interactions Teatro Trono represented for the second time “Arriba El Alto”. With renewed public, they once again made us cross the history of their city. 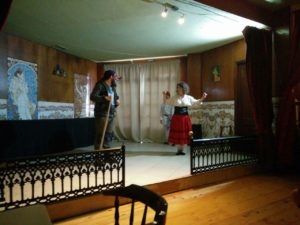 To conclude this third day, we gathered again in a new Point of Convergence, to continue constructing that X-ray that we need to fill a gap that must disappear. This time we immerse ourselves in a debate in which we dealt with the way culture is produced and how people’s relations are governed within it, ending the debate with the basic idea of how to start the creation of counter-culture. We put on the table the need to create a stable fabric, or how interesting it may be to share experiences from diverse realities. 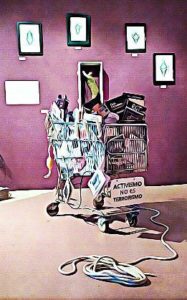 morning by Teatro Estepario (Teatro Estepario, 12:30 p.m.) and with the last Point of Convergence. It’s not late if you are interested!! Come and participate in the last day of “There are Brigdes. Four days to draw the X-ray of a gap”.