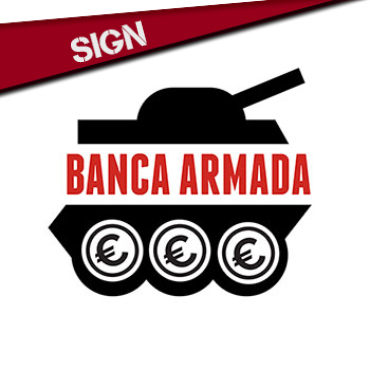 Campaign against banks that invest in arms companies and in favor of ethical finance.

The campaign is directed against financial entities that directly or indirectly finance companies dedicated to the manufacture of weapons and war machinery. It is promoted by different organizations related to ethical finance, peace and antimilitarism under the name of Armed Banking Campaign.

The campaign seeks for the clients of the bank to take action by pressing via letters directed to the entities or by changing the entity to one that is dedicated to ethical finance or that at least does not finance the arms industry.

The campaign is framed throughout the territory of the Spanish State.

From the moment the campaign was launched and with no specific completion time.

The amount of money that banks invest in arms companies amounts to more than 95,000 million dollars only in the Spanish State, including the main known financial entities. The campaign has no limit in numbers, it seeks to achieve the highest number of actions.

Companies that make money with the suffering of others in countries at war such as Yemen, Syria, Iraq…, are supported with funds coming from financial entities that profit from our deposits. These types of practices go against human rights and are little known by the general public, that is why it is necessary to make them visible.

In addition to ensuring that arms companies cannot produce new weapons, there is also the objective of promoting entities that invest in their environment and in projects that seek a fairer world and an alternative model for the defense of the environment and human rights.