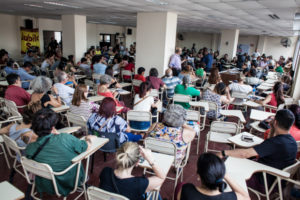 On December 13 the 11th inter-ministerial conference of the WTO ended. The conference could not reach a needed consensus for the signing of a final document between the ministers, mainly due to the confrontation between protectionism and multilateralism. Just in parallel, the Peoples’ Summit took place during these days, which filled Buenos Aires with demands, debates and alternatives.

The new US government that turned to protectionist positions, came to this summit with clear criticism of the WTO. Against this, China positioned itself as an advocate of globalization and multilateral trade. This new scenario jeopardizes the survival of the WTO as a competent body in the negotiations for world trade. Working by consensus, the WTO can not reach agreements if only one country is opposed. One of the subjects that were taken for granted in this 11th conference was the elimination of subsidies for the fishing industry but the reluctance of India prevented this agreement from being closed. In the same sense, the rest of the issues also remained without agreements; moreover some countries chose to revise the agenda set in Doha 2001, since they understand that the world has changed a lot since then; mainly the group of countries that make up the G90. 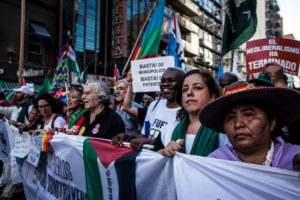 The great asset of Argentina as a host country was the FTA between Mercosur and the EU, but the intention to close it before the end of the year was truncated, pending another round of negotiations in January 2018 in Brussels. This leaves this summit as a resounding failure that shakes the legitimacy of the WTO.

While the negotiations took place, the People’ Summit was celebrated in parallel. Three days of intense discussion were opened in forums, workshops and seminars. People from all over the world and different areas met in the city of Buenos Aires to discuss and exchange impressions between book and typical food stalls. In addition to the street activities, which filled Buenos Aires with slogans and color, there were debates on the most diverse topics: feminism, interculturalism, economic alternatives, rights of workers and anti-militarism were just a few.

These are some of the recommendations made by civil society: maintaining the development and policy space of developing countries, elimination of fishing subsidies, elimination of the WTO agenda of electronic commerce due to lack of competences in these areas, the agricultural agenda must prioritize food security and sovereignty.

As a central point of this counter-summit, a march took place with the diversity of the streets of Buenos Aires with a single voice that shouted loudly “WTO Out, Build Sovereignty!”