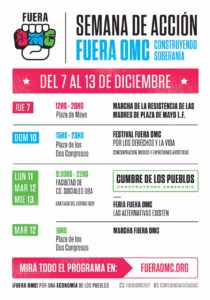 The 11th ministerial conference of the WTO will take place in Argentina from the 10th to the 13th of this month. This summit, which is the first time it takes place in a South American country, is intended to close the Mercosur-EU agreement as one of the central points for the host country. At the same time, the Peoples’ Summit will take place, which will bring together dozens of trade union organizations, NGOs, social groups and activists from different countries in Buenos Aires.

The WTO, of which 164 countries are part, is considered a multilateral trade space where binding international trade issues are debated, negotiated and taken. On this occasion, the negotiations will focus on issues that have a direct impact on fisheries and agriculture, such as public storage of food reserves for food security, agricultural and fishing subsidies, safeguards for developing countries, as well as E-commerce and services.

Faced with the practical abandonment of the agenda for the development of the WTO, 50 coalition countries that are in development, advocate the continuity of public food reserve programs that ensure a minimum price for their farmers and improve food security. Another of the great controversies are subsidies to fishing. The proposal is to put an end to the subsidies that industrial fishing has and to promote artisanal fishing. For the government of Argentina it is important that the free trade agreement between the EU and Mercosur goes ahead as it has been postponed for more than a decade. The summit will take place amid the international scandal in which the Government of Argentina deported and also withdrew accreditations to activists, investigators and journalists from various organizations. This earned him a diplomatic confrontation with the EU and Norway. 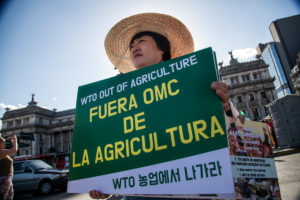 Faced with this, the response, both from the Argentine and the global society, goes ahead by organizing the Week of Global Action against the WTO. This began on the 7th with a march of the resistance of the Mothers of the Plaza de Mayo, which was followed by meetings, lectures, screenings and artistic performances that made visible the problems in which the WTO is guilty of deepening, among them the lack of democracy, patriarchy or job insecurity.

The Peoples’ Summit, which arises as a counterpart to the 11th ministerial round of the WTO, will have as its theme “WTO Out! – Building Sovereignty”, which from 11th to the 13th will have open forums for debate, talks and workshops that will contribute, from 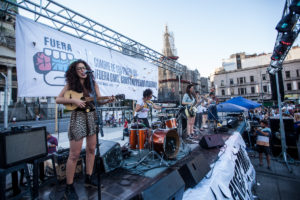 different perspectives, to issues such as climate justice, food sovereignty, feminism against free trade, rights of workers and rights of indigenous peoples, among others. Alternatives to the various problems of the capitalist system will also be oposed, while at the same time the fair “WTO Out – Alternatives do Exist” will take place in which different producers, who make social economy, local and ecological solidarity, will show their products and projects to the citizenship. As a strong point on Tuesday the dozens of collectives and thousands of activists participating in this week of action, will leave from the Plaza del Congreso in a march that will tour the city of Buenos Aires to say very loudly “WTO out, let’s build sovereignty!”