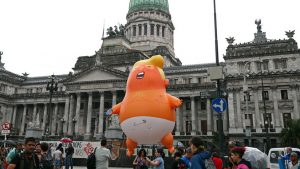 On November 30 and December 1, the 12th G20 Summit took place in Argentina, bringing together the leaders of the world’s leading economies and the European Union, as well as 14 international organizations. In turn, there was a Week of Action against the G20 and the IMF, which lasted between November 25 and December 1, with the aim of denouncing the neoliberal policies promoted by these two organizations.

The G20 is made up of 19 countries from all continents and a representation of the EU. Currently, it is the main space for political and economic deliberation in the world. Altogether, the entities represented in the G20, collect 66% of the world population and 85% of the world gross product. On this occasion a summit took place with wide geopolitical tensions, due to Donald Trump’s irruption in the White House, with an agenda that included controversial issues such as climate change or trade protectionism.

This summit, like WTO’s last one, did not give concrete results. Despite the mediatic makeup of selling the summit as a success by the Argentine government, the truth is that the consensus document agreed in extremis means nothing. The current debate “protectionism versus liberalism” was not taken into account in this document, expressing only that the WTO will be reformed without clarifying how or when; with regard to climate change, with the exception of the United States, the final document reflected the irreversible commitment of the Paris Agreement, although the most singular was the agreement of a truce in the trade war between China and the US, achieved in a bilateral meeting between these two powers.

While the leaders discussed behind closed doors and with a city of Buenos Aires surrounded by police forces, with up to 23,000 agents deployed and with a perimeter of several kilometers, preceded by a campaign of fear and arrests a few days before the summit, activists coming from all over the world came to the city of Buenos Aires to denounce that the decisions taken in this forum go against Human Rights and the planet. Through different activities such as talks, meetings, artistic expressions, etc., the various organizations and activists discussed alternatives to the capitalist system. The People’s Summit had as its central act the great demonstration that toured the city under the slogan: “Out G20/IMF. For the political, environmental, cultural and economic sovereignty of our peoples and our bodies.”

WTO 2017: A FAILURE OF GLOBAL NEOLIBERALISM