On the 17th in Compostela, the Communication, Power and Contrapoder Conferences were launched. The first step of this road for the analysis of problems and alternatives within the current communication, which we will continue until December 8, we accompanied José Candón, who portrayed his vision of digital activism and the contradictions represented by the internet through his extensive experience in the world of communication, activism and new technologies.

We met at Gentalha del Pichel at 9 p.m. to listen to José Candón, in his lecture entitled “A cage with windows: Risks and opportunities for digital activism”. José began by reviewing the risks posed by new technologies for activism, making a historical review of the problems attributed to the Internet, comparing them with those attributed to other technologies such as the telephone, radio or the printing press, pointing out the repetition of debates throughout history –such as telephone calls keeping people from leaving the house anymore–, although paradoxically time showed that it was the other way around. Regarding the “clicktivism” habitual controversy, he pointed out that in its day if occurred with press but, at a real level, communication and politics can not be separated. After dealing with these and other risks, such as censorship, surveillance in the network, or the error of voluntarily giving up our data on the Internet and the lack of protection that may imply, we moved on to the “windows”. In this part of the talk, José analyzed the role of the Internet, for example, in the dissemination of movements such as the Zapatista uprising 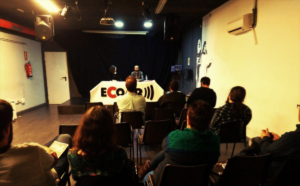 , the Arab Springs or the pressure exerted by the internet over traditional media when contrasting fake news. In addition, he also highlighted the role of leaks by Edward Snowden or Wikileaks, as well as uncovering surveillance and other issues. And finally the organizational, logistical and economic advantages that they imply for activism.

After a little debate we ended this first day in which we reflected on the role played by the internet when doing activism, saying goodbye, and heading towards Vigo where the second lecture of the Communication, Power and Contrapoder Conferences would take place. They will land in different populations (A Coruña, Madrid, Montpellier, Montreal and Vigo) to continue analyzing the problems and alternatives of communication.